History of The Flying Horse

First opened in 1691 on Rochdale’s most dangerous street, rebuilt in 1923 and reopened in 1926 the flying horse hotel is the oldest free house in Rochdale and was once the post office and court house.

By 1819 amenities included a dwelling house, brew house, garden and cottage, all leased to James Whitehead, innkeeper, of Packer Street. In 1823 the committee appointed to gain a Police Act for the town met there, and in 1854 Rochdale’s first Revision Court was held on the premises. For many years the Magistrate’s Court sat at the Flying Horse, until the Police Court transferred to the Commissioner’s Rooms on Smith Street in 1854.

Demolition of the old Flying Horse Hotel was recorded in the Rochdale Observer of 26th June, 1923, and noted that with its disappearance went the “last building save one, of all those which in the days of our Great-Grandfather’s formed what was then known as Packer.” 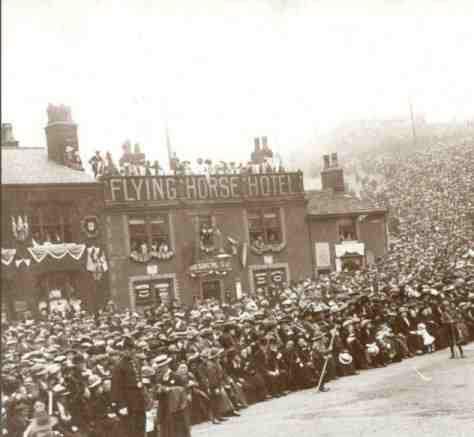 The present building, re-named the Flying Horse after a spell as The Sports, opened in the summer of 1926 with landlord James Berry at the pumps.

It was three stories high and boasted a smoke room, commercial room, parlour and bar on the ground floor. On the first floor the dining room fronted onto the Town Hall Square and six second floor bedrooms offered all mod cons to its patrons, including electric lights and heating.

The Flyer is now owned by business partners Ben Boothman and Craig Richardson who bought the business from Sam and Per Bonde back in April 2011. The hotel is managed by Ben, his partner Sarah and their family who have been working at the hotel for over 25 years.

Today The Flying Horse Hotel has a growing reputation as Rochdale’s number one live entertainment venue. Apart from being the only venue in Rochdale to host live music four nights a week we have also had some of the biggest names in comedy perform on our stage.

We use cookies to ensure that we give you the best experience on our website. If you continue to use this site we will assume that you are happy with it.Ok